Ironically, some vacations can induce major stress. Whether it’s a family trip with drama to spare, or in this case, a solo sojourn fraught with bad luck, these vacations induce anxiety in place of peace and provoke anger instead of joy.

Such was the case this August when I visited Cologne, the fourth largest city in Germany, the first stop on an extended itinerary that included Mannheim, Heidelberg, Munich, and Berlin. The plan was to visit my good friend Anna Bea in Mannheim and squeeze in a quick tour of Germany in just nine days. Unfortunately, the shenanigans started as soon as I got off the plane.

I Got 99 Problems And Money Is One

I needed to get some euros for my vaca so I found the nearest bank ATM at Frankfurt airport, stuck in my card, and pressed 500 euros. Error message. Pressed 400 euros. Error message. WTF. Something was definitely not computing. So then I tried entering the amount in dollars. Stupid move. The damn machine spit out $500! I was pissed. I had to exchange my dollars for euros at the Travelex. So much for saving on fees–I ended up paying double–my card fee and the super expensive exchange fee.

Train Ticket Troubles Got Me Trippin’

Say that three times fast! So, already about $20 dollars in the hole, I headed over to buy my train ticket to Cologne from Frankfurt. I already knew that I should buy a German Rail Pass that would allow me four days of unlimited train travel for 334 euros. This was a great deal considering I’d be getting to all my destinations except Berlin by train. But somehow my request to the lady at the ticket counter got lost in translation and she booked separate tickets totaling over 600 euros! She had to void the transaction but, once again, their was no voiding the transaction fees on my card and on her system. I was another 16 euros in the hole.

Where’s Google Maps When You Need It

I was still a bit frazzled when I finally hopped off the train in Cologne. But wow, the first thing you see when exiting the station is the massive Cologne Cathedral (Kölner Dom). It’s the largest Gothic church in Northern Europe and it’s two huge spires actually give it the largest facade of any church in the world. The World Heritage Site is Germany’s most visited landmark, according to Wikipedia, attracting an average of 20,000 people a day. 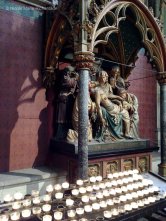 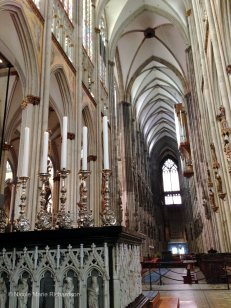 Sitting on the steps of the Cologne Cathedral

View of the train station from Cologne Cathedral

Before I could really explore the Cathedral I needed to find my hotel, Star Am Dom Superior, and drop off my bag. I whipped out my map (I’m pretty awful when it comes to following maps) and preceded to take every wrong turn possible. When I was finally certain I was on the right street, I walked the entire block no less than four times and could not find my hotel. No one else seemed to know where it was either until a random hotel clerk explained that it was down a narrow set of steps right on the edge of an overpass that spanned the nearby highway.

The hotel was exactly where the clerk described it to be (I would have never found it without his help). The room, however, was not as described. It was a dark shoebox with one small window overlooking a busy highway. The sound of the cars flying past was deafening when the window was open. When the street noise was shut out the sound of the elevator made up for it. But the room was clean, the bathroom was newish-looking, and the wifi was free so… I dropped my bag and dashed out to explore. 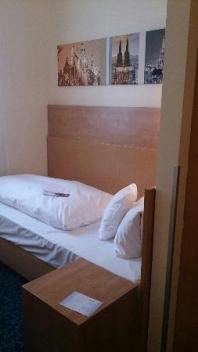 I Thought French People Were Rude

Cologne has a beautiful and very walkable city center, full off modern buildings and older architecture, busy streets, tons of tourists, quaint squares, a bustling waterfront promenade, and tons of museums, shops and restaurants. Most of the city had to be rebuilt after 95 percent of it was destroyed by World War II bombs.

With no route in mind I made my way back to the Cathedral and then to the waterfront. As I walked I felt eyes, a lot of eyes, on me. My friend Marco had warned me about this odd phenomenon of people staring so I wasn’t too unsettled. They will stare at you because you’re black, he said, but they won’t be rude. Well, a handful of people were actually very rude. At a pub called Dominikaner the waitress made no effort to take my order or find me a seat. Thankfully, two nice gentlemen offered me a seat at their table outside. They were Mexicans living in Cologne. The food was great but the service was terrible.

On the waterfront, I encountered many more rude individuals when trying to find the company I booked my one-hour boat tour of the Rhine River with. I had pre-booked the tour on Viator.com and the name of the company was not unique. A few people made no effort to help me at all and one person literally shooed me away.

When I finally found the tour boat and climbed aboard, the bright blue sky suddenly darkened. I was excited to see some of Cologne’s top attractions–the Cologne Cathedral, the Hohenzollern Bridge, historic old town, the Cologne Chocolate Museum–from the spacious sun deck of the river boat. But a dense fog moved in to cover the beautiful city skyline. 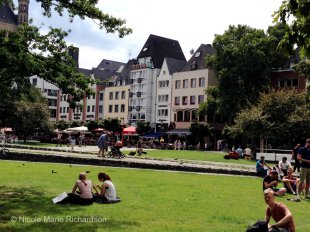 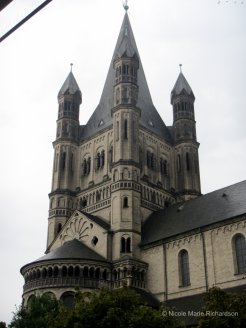 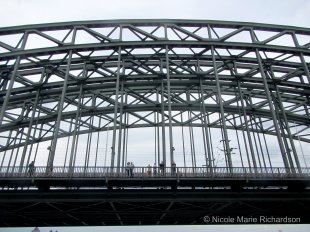 About halfway through the tour I felt a fat drop of rain hit my nose. Then the sky opened and everyone made a mad dash to get inside the boat. I spent the rest of the ride pressed against foggy glass unable to see much. After debarking, I explored old town in the rain, with no umbrella. I was soaked. Thankfully my camera is waterproof.

That evening I peeled off my wet clothes, took a hot shower and waited for the rain to stop. I was eager to check out Cologne’s lively night scene. The rain let up around 11 p.m. so I hopped on the train and headed to the area between Zülpicher Straße and Luxemburger Straße streets. What I found were trendy bars, rowdy pubs, loud night clubs and tons of people having fun. 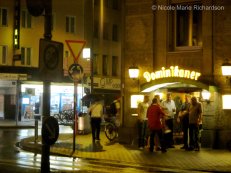 I was amped! I spotted a place that didn’t look so intimidating and started toward it, but just then a brawl broke out on the street outside the place. I had a sudden change of heart and decided to head to the much safer looking pizza shop across the street. I ate my truly disgusting pizza surrounded by smokers laughing and generally have a great time. I felt lonely and way too vulnerable to make a second attempt at entering a club. I decided to head back to my shoebox and call it a night.

The next day was bright and sunny. I only had half a day to explore, so I revisited Zülpicher Straße and Luxemburger Straße streets, heading from Rudolfplatz and the Hahnentor, a beautiful medieval gate, to Neumarkt, then from Deutzer Brücke to Rathaus and Alter Markt. It was a warm day and I saw children playing in quiet parks, people relaxing in small cafes, and I could smell fresh pastries and flowers as I walked through a farmer’s market. Along the way I saw many of Cologne’s Romanesque churches, including St Kunibert and St Gereon.

My mood was much improved as well and the minor disasters from the day before were mostly forgotten. When I boarded the train to Mannheim I felt content and my thoughts were only of the beauty of Cologne and the great time I had exploring. I would say all in all it turned out to be a nice experience.

I want to hear all about your travel setbacks! Tell me in the comments below.

One response to “7 Setbacks That Almost Ruined My Cologne Trip”