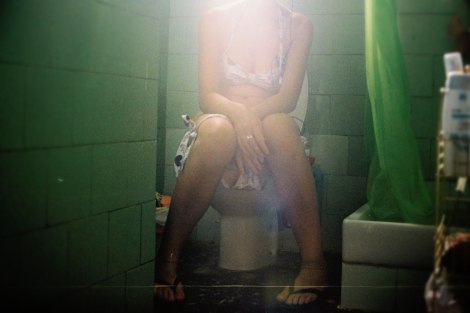 Today I felt like a warrior while I slashed at thick Amazon leaves and branches with my machete. I traversed slippery mountain inclines with ease and descended with even more grace. I leaned forward into the rush of air as my speed boat sliced through the Amazon River. And I didn’t shrink away when I came face-to-face with a Anaconda.

As I assessed my inner strength and took stock of my bravery, I also noticed a small, almost imperceptible feeling growing in my gut. Was it nervousness I was feeling? No. As the feeling intensified my skin became warm and clammy. Soon my stomach was speaking in groans and grunts. I spied a bead of sweat sneak past the corner of my eye.

Suddenly my stomach twisted into intense knots and my intestines felt as if they were being pumped with piping hot lava. I momentarily forgot that I was on flimsy tin boat being flung at top speed through the river. I ground my ass into the wooden seat and pressed my legs together tightly. I squeezed my cheeks (those cheeks) like a clamp and said a silent prayer that my hotel would soon appear on the watery horizon.

But the river was endless and soon my body grew hot with the need to “keep it in.” My face especially felt like I was staring into a deep inferno. I closed my eyes. Maybe I could will it away. Nope, no luck. There was only water in front of me. More. Fucking. Water.

Then the first sight of my hotel appeared and all I could see ahead was my room and then my toilet. Just then my anus began to burn. A flurry of “squeezes” didn’t extinguish the smoldering. I felt faint as I took my first weary step toward the shore and then to bathroom nirvana. I walked as fast as I could without bringing too much attention to myself, and then when I rounded the corner into an empty hallway I broke out into a sprint.

My keys didn’t want to fit into the lock, of course. I dropped them and thought I might die as I bent down while simultaneously wrestling with my muscles to keep “it” contained. The door finally opened and it was like the gunshot at the start of a race. I took off at top speed to the bathroom undoing my paints as I ran. The cold seat welcomed me and what felt like a hot liquid dragon clawed its way out. Just when I thought it was finally over another and then another passed through the fiery sphincter. I had a quick thought that perhaps this was the “Ring of Fire” that Johnny Cash was lamenting about.

The torrent stopped. I was weak but I was able to stumble to the shower. I desperately needed some cool water to rush over my seared skin. I took my pity party to my bed. Beds are a gift from God because within an hour I was beginning to resemble myself again. I felt somewhat back in control of my body and its functions. I felt well enough to get dressed and head out to dinner with my roomie. We even had a laugh about the day’s early episode.

And then…during a bout of fitful laughter I felt something hot and wet slip past that fiery gate and land squarely in my cotton panties. I stopped in my tracks. More threatened. I dared not to move. I slowly turned and duck walked back to my room, where the entire toilet episode went down again. My earlier feelings of pride and courage were all flushed now. I was a cowering human brought to my knees by…the runs.