I’ve attended this fun event at least five times since 2003 when I took a potentially risky road trip there with a guy I had just met online (long story!) Obviously it all worked out (I’m still alive) and I had such a blast I decided to go back again and again. Each year this event draws nearly 1.3 million visitors to the beautiful city of Toronto to celebrate Caribbean culture with a parade, performances, concerts, parties, and more.

According to Wikipedia, “Caribana was introduced to Canada by immigrants from Trinidad and Tobago, St.Lucia, Barbados, Grenada, Guyana and Jamaica.” So you can imagine the air is full of steel pan music, soca and calypso. Bring comfortable dancing shoes and channel your inner West Indian!

Here are five more reasons to go this year:

The city comes alive during Caribana. Although it’s the largest city in Canada, the downtown area of Toronto is very walkable and also has great public transportation. That means in just a few short days you can visit the CN Tower, High Park, Harbourfront Centre, The Art Gallery of Ontario (AGO), and Kensington Market, to name just a handful of attractions. The streets will be filled with people giving off a palpable electric vibe. What’s more, the city welcomes these newcomers. People are nice and the place is safe. Unlike the West Indian American Day Parade in Brooklyn, you don’t have to worry about getting hit with glass bottles or shot while you’re having a good time. 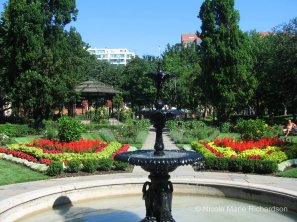 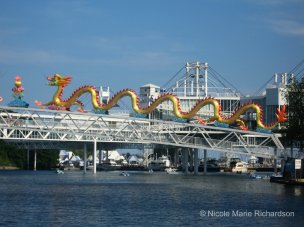 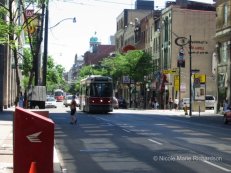 There’s no shortage of nightclubs in Toronto and it seems like everyone of them is doing something special for Caribana. According to the event’s website, there’s no less than 10 official parties happening between Thursday and Sunday. I’ve always enjoyed going to the Atlantis Nightclub which is suspended over the water and is entirely glass so you can see the entire city.

I think it’s impossible to have a bad meal in Toronto. I’ve been to so many restaurants there it’s hard to choose a favorite. But I would recommend going to Hot House Cafe for good brunch, Scotland Yard for great bar food, and Bâton Rouge Restaurant & Bar for dinner. This place has an AMAZING slow cooked pork chop!!! I get it every time.

The parade starts on Saturday around 10 a.m. inside Exhibition Place and then spills outside and down Lakeshore Boulevard. You’ll need to buy tickets to see the competing Masquerade Bands in the stadium, but the parade is free. You can camp anywhere along Lakeshore with a chair or blanket and enjoy the passing bands, dancers, and costumes. You won’t be alone–about 1 million people come to the parade. There’s also food vendors selling amazing Caribbean cuisine, exhibitors with jewelry and other goods, and folks pushing CDs and music also. If you’re single–dress to impress–because there’s no shortage of beautiful people. 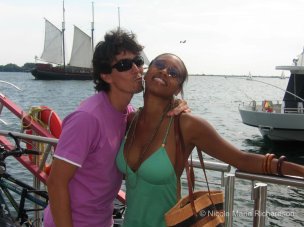 Lady in the float 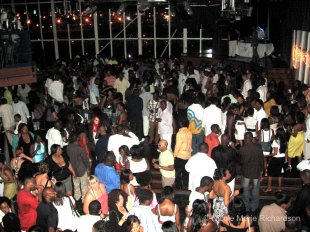 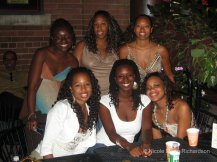 Strolling around Toronto, it would be hard to miss all the open air concerts happening around the city. Music and dance flash mobs will basically break out in the streets, in the mall, and in the squares. I stumbled upon an impromptu performance by Wyclef Jean one year in one of the malls. The Harbourfront Centre also will have free concerts–I saw a battle of the steel pan, soca and calypso bands on another visit. There are also paid events happening all over the city, like the Mr. Fete with Machel Montano concert happening in the Caesar’s Convention Center Courtyard on Saturday.

I promise you there will be no shortage of things to do during Caribana in Toronto. It’s definitely worth the trip.