Being from the concrete jungle of NYC, the jungles of the Amazon blew my mind. In NYC there’s a Starbucks and an ATM on every corner. In the Amazon there are mesmerizing waterfalls and trees as tall as skyscrapers in every direction.

A trek through the Amazon was one of the highlights of my two-week sojourn in Ecuador and Peru. The itinerary was intense, including six flights, over 30 hours on buses and trains and miles and miles of walking (mostly uphill!) When we purchased the guided tour on Friendly Planet, I also didn’t expect that our main mode of transportation in the Amazon would be a rickety tin boat that sank way too deep into the murky, rough water with the weight of more than nine adult humans and their luggage. If someone moved just slightly to the left or the right, the boat exaggeratedly tilted in that direction. They really need to slap one of those max capacity stickers on the side.

Anyway, I thought it would be fun to put together a list of shit that only happens in the Amazon. Enjoy.

1. Monkeys hang out at the neighborhood bar.

One of our rest stops during the six-hour bus ride deep into the Amazon Basin in Ecuador was in a quaint little town called Misahualli. The scene at the local pub was pretty low key. Stretching out across the table or even swinging along the walls was encouraged. 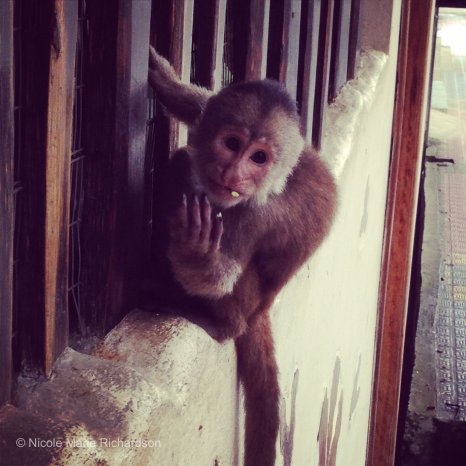 One thing is certain in Punta Ahuano, the tiny port town on the north bank of the Napo River. If your piragua (boat) isn’t freshly painted or if your hull isn’t shored up with the shiniest hammered tin, then you might as well not even make an appearance on the main river crossing. 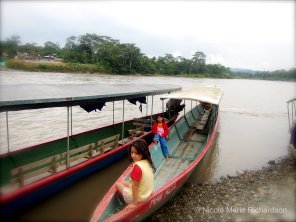 Flossin’ in my boat

3. Luxury hotels think it’s okay not to put glass in the windows.

Maybe it’s the distrustful New Yorker in me, but I need more than a screen between me and what lurks in the darkness at night when I’m sleeping. I don’t care how nice your hotel is La Casa del Suizo… Get some damn glass installed in those windows!

4. A hammock is the only patio furniture you need. Enough said.

5. You can walk down deserted, dark alleys and not get jacked.

Like a scene out of a scary movie, a small adventurous group of four left the secure compound of the hotel, ventured into town late a night in search of a karaoke bar, and found themselves in the heart of darkness. Seriously, picture wandering through a deserted shanty town at 9 o’clock at night with no street lights, hungry-looking stray dogs following you, and only the sound of crickets… And we all lived to talk about it. 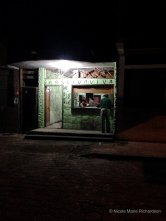 In town at night

6. Three rounds of karaoke and two rounds of drinks cost less than $10.

The bar was an old clapboard hut with one round wooden table in the middle of the room, a small bar in the back displaying liquid in dusty unmarked bottles, and a not so modern looking TV hanging from the wall. Almost all the karaoke songs were Spanish ballads, other than the occasional Phil Collins or Rihanna song. My travel buddy forbid me to take photos of this drunken event, btw.

7. Wellies are the trendy footwear of the season.

For our Amazon trek we had to suit up in bug repellant clothes, a poncho for the rain, and some very in demand Wellies.

All dressed for my trek

Tina pulls up her Wellies

8. Where else would you pay good money to trek through dense muddy rainforest and get attacked by big bugs?

The jungle’s bug game is no joke… 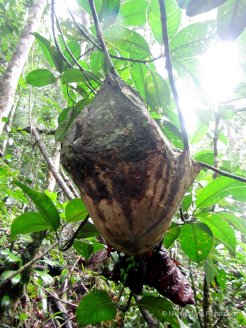 Going down is the hard part 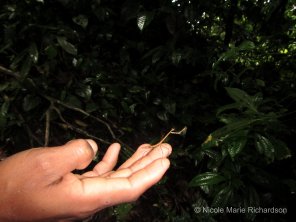 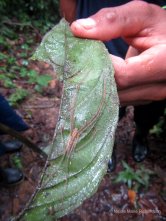 OMG, what is that? 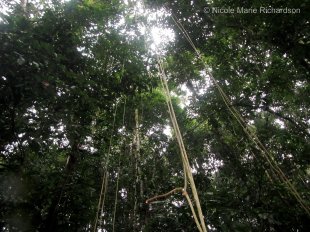 Where is this web’s owner?

9. The raindrops are so big they feel like they are slapping you in the face.

On a visit to a local Quechua village, our guide first had us drink chicha, an typical alcoholic beverage of the region and then shoot darts out of a long stick… (dumb you say…) He demonstrated how we were going to catch our dinner for the evening using this technique. He sharpened the darts with piranha teeth, loaded the blow gun, and took aim at… the wooden target. Thankfully our dinner was of the buffet variety served back at the hotel.

11. Up to 10 people live in one small hut (although this can be said about some NYC apartments).

The huts are on stilts in case of flooding, the kitchen is a wooden garden box filled with dirt, ash, and burning wood, and the bed is the floor or a hammock. That is all.

A woman and her child

I bought this from a lady in her hut

There’s a baby in there 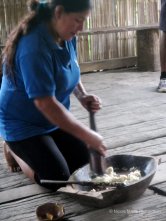 12. Rodents can grow over 100 lbs (although this too has been reported in NYC).

Sadly there are hardly any wild animals in large swaths of the Amazon. So we had to go to animal rescue center, AmaZoonico, to see anacondas, parakeets, monkeys, tapirs, and the capybara, the largest rodent in the world. 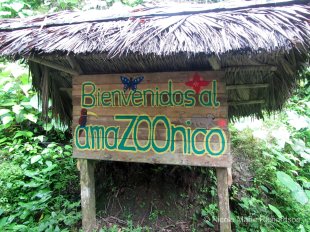 14. You know there are snakes, caimans and piranhas in the water but you go tubing anyway.

Oh and did I forget to mention the candiru, a fish that will follow your warm stream of urine and swim into your penis or vagina. Magical! 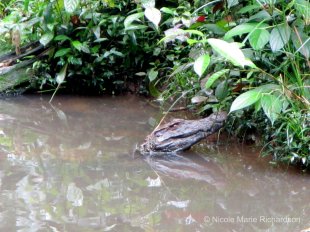 She’s warming up to the idea

15. The riverbank serves as the laundry mat, the corner social, and the grocery story.

Hey Hun, can you run out and pick up some fish? Here’s the net…

Time to do the laundry

Boys play in the water

16. Nicole can get away with taking a ton of funny-face selfies in volcanic hot spring pools at Termas de Papallacta.