I live in New York City so partying isn’t a foreign concept to me. There was a period of time when I frequented clubs many times a week, danced, flirted, and drank myself into oblivion. But at some point I stopped drinking and the party scene lost some of it’s luster.

1) There’s the “I just want to be seen” parties where no body really dances and people are dressed to the nines.

2) There’s the raves, where the music is great and usually different on multiple floors, people dance, drugs and other debauchery are everywhere, and no one cares how they look.

3) And then there’s the smaller, hole in the wall spots, with great music but usually one genre and people come dressed to impress but they dance too!

I say all this because when I visited Ibiza in 2010, the goal was to party. I had no idea what to expect and I was blown away by what I found. The parties didn’t fall into any of these patterns. It was something completely new to me.

But let me back up… and start from the beginning. My travel buddy, Tina,  and I booked this trip through European Destinations and the itinerary included Barcelona and Ibiza, flights, hotels, transportation to and from the airport, and breakfast for $1074 per person. We were there from September 21 through September 28.

We went to Ibiza after Barcelona which was a good choice because we really tired ourselves out exploring Barcelona, and in Ibiza all we did was sit on the beach all day and party all night.

We stayed at Villas del Sol in Santa Eulalia del Rio. When we arrived early in the morning there was no one there to let us in and we waited for over an hour at the front door. Our room wasn’t ready but the owner did make us breakfast while the room was being prepared. The room was old and drab, with only the basics–like the hotels you expect to find in Cancun or Panama City, Florida–I guess because the owners don’t want to invest in rooms that may be destroyed by trunk party-goers. 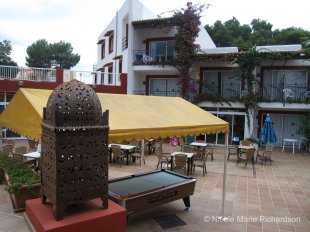 We were about a ten minute walk to the beach, which was beautiful. The water was calm enough to lounge on an inflatable tube, the beach was white sand and tiny shells and stones, and the scene was cute bars and restaurants along the shore. We spent the majority of our days just lounging.

Promenade along the beach 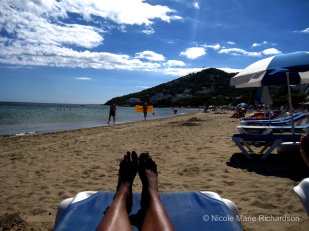 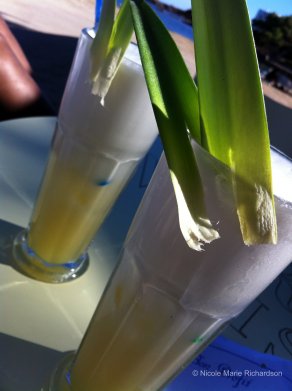 But at night, we hopped in a cab and drove about 15 to 20 minutes to the strip where most of the clubs are located. We had pre-purchased our tickets for these clubs online for between $50 and $100+.

The first night we went to Es Paradis. Picture a huge warehouse-type space with a DJ booth, a stage, multiple bars, pink, yellow, green and blue fluorescent lights shining, and everything from house to hip-hop on rotation. The people were mostly young Europeans, some dressed in only bathing suits and Speedos, while others were dressed in sexy dresses or button-up shirts and jeans. The vibe was palpable and you couldn’t help but dance. Later in the evening half naked women came out to perform on the stage, doing trapeze, acrobatics, fire dancing, and more. I’ve seen similar shows in Vegas.

The second night, we went to Space, a 24-hour party. They either stamp you or give you a wristband (I can’t remember) and you can go and come as you please. The place was huge, with multiple rooms and floors as well as a open rooftop deck. Oddly the music was that Eurodance music on every floor and in every room. For the first hour it was fun, but then it got tedious. You can’t really dance to this music, you basically jump up and down. As a consequence, many people were just standing, packed together in these rooms. The real fun was on the rooftop, which had odd jungle gym /playground-type seating. There was an opportunity to mingle and chat with people without the music blaring and the cramped space. 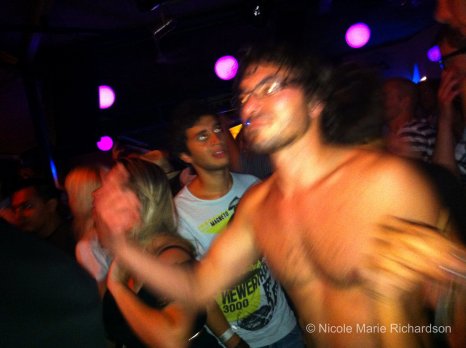 Dancing at Space with hot guy

The music extended to the beach in the day time too, where sexy guys with buff bodies played volley ball and lounged on beach chairs.

We caught the ferry from the harbor in Ibiza over to Formentera one morning and hopped a bus to the beach. It was, hands down, one of the most beautiful beaches I’ve ever been to. The water was azure blue, warm, and shallow enough to walk out far before the water even touches your belly.

Nicole on the edge

The door to nowhere

Formentera beach from a distance

Yachts dropped anchor just off the shore and small boats jetted their ultra-rich inhabitants to shore. One Israeli was chilling behind us on the beach with his entourage, getting a foot massage while negotiating for a boatman to take him and his crew to snorkel. He looked at Tina and I intently and then finally asked us where we were from. “Brazil?” he suggested. We told him we were Americans and he snorted. After he regained his composure, he invited us out to his massive yacht he pointed to just offshore. “We can go party tonight, I’ll take you to the best places for dancing,” he said. He didn’t look like he did too much dancing–he was round and appeared to be in his early 50s, although his posse was significantly younger.

Tina looked eager to say yes, but I replied that we were flying back to America tomorrow and would have to pass on his invite. “I’ll get you back in time for your flight,” he begged. “You can’t come to Ibiza and not party!”

The answer was still no, but we nodded in agreement at that statement. You certainly can’t come to Ibiza and not party.

2 responses to “Ibiza: Where the Party Never Stops”