Going on safari is the real deal. It’s nothing like going to the city zoo. Why? There’s no gates, walls or windows to separate you from the wildlife. And in Kruger National Park, you’re on the animals’ turf, not the other way around. The first thing that struck me was how close the animals are and they don’t always seem happy to see you either.

The girls and I spent one full day on safari from about 6 a.m. to 4 p.m. Our Smartours guide told us that any good safari trip requires three days–which will allow you to see the Big Five (lion, African elephant, Cape buffalo, leopard, and rhinoceros). But we were lucky enough to see all five in just one day. 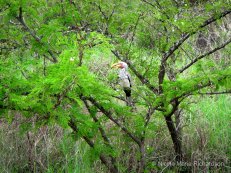 Lion picture with the bad zoom…

The term Big Five was coined by big-game hunters and refers to the five most difficult animals in Africa to hunt on foot because of the degree of danger involved. And many have a bad attitude toward visitors, especially the elephants and rhinos, which are known in the park for trampling over cars and killing tourists. Other big killers include hippos and crocodiles, which protect their water holes like pit bulls protect their food bowl.

This was my first time on safari and a lot about the experience came as a surprise to me. Here’s 10 interesting facts that may help you while planning your safari adventure: 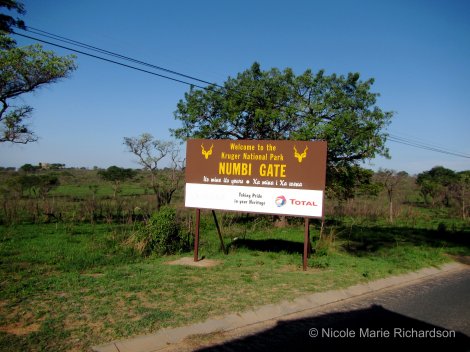 1) The park is remote. The amount of travel to get to this safari was mind boggling. From Cape Town, we boarded a roughly two-hour flight to Johannesburg, then we were on a bus for another six hours heading toward Mpumalanga, and then the park was still another hour or so away from our hotel, Protea Winkler Hotel. Smartours failed to detail the amount of travel required and in hindsight their marketing material is quite sneaky. Everyone on our tour was surprised to learn about the six hour bus ride. 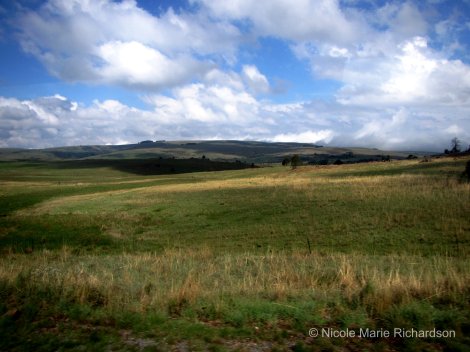 2) Elephants are not the No. 1 hunted animals (for their ivory) anymore. In fact, the ranger and our Smartours guide told us that there are so many elephants now that the park will have to be expanded into neighboring Mozambique to accommodate the huge beasts. Poachers, which sometimes work with crooked rangers, are now on the hunt for rhinos because locals believe the horn has medicinal properties. They also hunt zebra for their skins to sell.

3) The park is huge, with an area of 7,580 sq mi, it’s one of the largest game reserves in Africa. It’s not possible to drive it all in one day, so the rangers work together radioing each other if they’ve spotted one of the big five (but not rhinos for the reason I mentioned above). The roads are confusing, unmarked, and they all look the same. The landscape is mostly trees, shrubs, and grass, with some mountain ranges and water holes. It would be IMPOSSIBLE to navigate on your own.

4) Strangely enough, you do not need a ranger to tour Kruger National Park. It’s possible to drive right in with your car. In fact, we saw many folks doing this, one with a tiny Nissan. It is very possible, however, that three things are likely to happen: 1) you’ll get lost because the roads are one big maze; 2) you’ll die because elephants and rhinos can easily trample small cars; and 3) you won’t see much without the help of rangers communicating where the animals are.

5) Yes, it gets hot! But not before it gets really, really cold! We set out early and it was frigid! We were dressed in layers and wrapped in blankets in the open jeep. The wind was like a cold knife slicing through our clothing. It didn’t start to warm up until midday when the clouds started to move out. Then I could not strip fast enough! Be prepared.

6) Bring a camera with crazy zoom capability and some binoculars too. Like I said, this isn’t a zoo. While some of the animals are right on the road, others may be way off in the distance. For example, the lions we saw weren’t close (and thank God for that!) My zoom wasn’t quite cutting it, but my girlfriend’s zoom was exceptional.

My friend Billie’s lion picture with the amazing zoom

Lion picture with the bad zoom…

7) There are food and bathroom breaks, but few and far between. I hope you can hold your bladder because you’re not allowed out of the truck (for good reason) and there may be hours before a potty break. Some of my friends ate some questionable food sometime before the safari and well I guess you can see where I’m going with this… it wasn’t pleasant. Don’t make the same mistake.

8) Sunblock and bug spray are as necessary as water. Enough said.

9) Night safaris are a scam. Our ranger told us that it’s impossible to spot animals at night. All you can see are their eyes, but there’s no way to tell what animal is behind those reflective retinas. Hence, it’s also very dangerous. It’s not worth the money or your time.

10) Pray for an educated ranger. Ours was the best. His name is Edwin and his family grew up on the land and he lived in the neighboring village. He could spot animals in the distance that even a trained sniper would find hard to see. He also knew the name of every animal, bush, and bug. Lastly, he knew how to behave around the animals. He told us when to shut up because our lives depended on it. He’s freelance so it may be possible to hire him or request him as your ranger.The company he works for is Gap Tours & Transfers.

So, the safari was great. You really feel at one with the nature around you and blessed to be in the presence of such beautiful and often endangered animals. Despite the travel, the experience was worth it and I’d do it again in a heart beat.

2 responses to “Kruger National Park: I Was Steps Away From the Top 5 Killers”